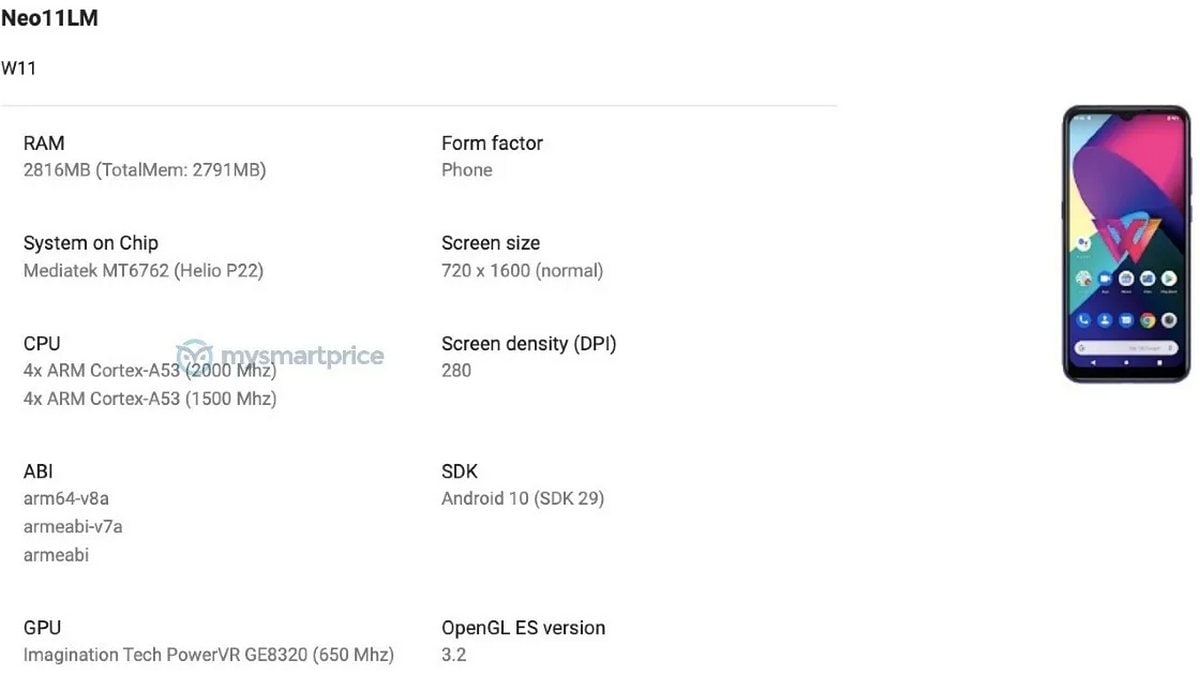 LG W11 has reportedly been spotted in a Google Play Console listing. The upcoming smartphone may feature a MediaTek Helio P22 SoC and 3GB of RAM. It appears to be a mid-range smartphone that has relatively thick bezels on all sides and a notch design for the selfie camera. The phone is said to come with Android 10 out-of-the-box. Additionally, the LG W11 has also been spotted in a Google Play Support listing with model number LM-K310IM.

As per a report by MySmartPrice, the alleged LG W11 has been spotted in a Google Play Console listing that hints at some of the key specifications. The phone is said to be powered by the MediaTek Helio P22 SoC and have 3GB of RAM. Presumably, more RAM configurations may be announced later. The graphics are expected to be handled by the PowerVR GE8320 GPU. The phone is listed with an HD+ display with 720×1,600 pixels resolution and 280ppi pixel density.

The image seen in the listing shows a phone with a notch for the selfie camera at the front and thick bezels all around. The power and volume buttons are seen on the right side of the phone, with an additional button on the left that is presumably a dedicated Google Assistant button, as seen on other LG smartphones as well.

Coming to the Google Play Support listing, the report by MySmartPrice states that it shows the LG W11 has model number LM-K310IM, which was previously speculated to be the LG K31s.

Early last month, the LG W11 with model number LM-K310IM was spotted in a US FCC listing that hinted at a 4,000mAh battery, 32GB of storage, 3GB RAM, and a MediaTek Helio P22 SoC. At the time, it was believed to be the LG K31s but that does not seem to be the case anymore, since the Google Play Support listing has linked the LM-K310IM model number to the LG W11.

LG has not shared any information on the LG W11, however, the Google Play Console listing suggests that its launch may be around the corner.

Is this the end of the Samsung Galaxy Note series as we know it? We discussed this on Orbital, our weekly technology podcast, which you can subscribe to via Apple Podcasts, Google Podcasts, or RSS, download the episode, or just hit the play button below.